Dos Lagos Vineyards, in my estimation is going to one of the most talked about names in Napa Valley within 5 years: Here’s Why: 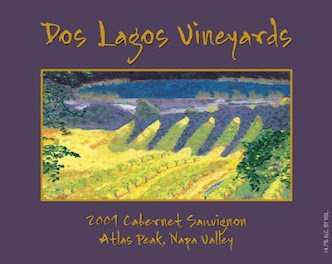 I’ve talked about Atlas Peak before in this space, but it is truly one of the more interesting and unique places in Napa Valley these days.  I’ve heard it described by a few folks who have been the Valley for some time (certainly longer than I have) that Atlas Peak is much like walking back in time, to a simpler time in Napa.  That’s a time before the tasting of Paris, before the $30M+ sales of wineries and before the pretentious nature of some wineries which have gained famous names more for real estate than for wine.

When we start to look at wineries and wines to include in our wine clubs, we tend to look at two things.  Vineyards and winemakers.  Sure a great story is a bonus and makes writing these blog entries and newsletters easier, but at the end of the day the most important aspect of a winery is what ends up in the glass.

The vineyards on Atlas Peak aren’t at issue any more.  The wide ranging and dramatic success of Stagecoach Vineyard among others has truly put the AVA on the map when it comes out outstanding growing areas for Cabernet, among other grapes.  In fact, when we’ve done informal taste tests with some of our best customers, they tend to enjoy Atlas Peak wines at least as much as their more famous relatives on Howell Mountain and other mountain AVA’s within Napa Valley.

The second aspect of a winery is their winemaker.  Here’s where everyone should truly be sold on Dos Lagos-their winemaker is Robert Foley.  Foley isn’t one of the new generation of winemaker superstars who doubles on the San Francisco celebrity circuit, but you’ll recognize a few of his winemaking projects immediately:Pride, Switchback Ridge and School House.  If you were to ask a number of wine critics which Napa Valley winery made mountain fruit a household attraction, I’m betting more than half would tell you that Pride is the biggest thing in mountain wineries within Napa.  All that is to say that Foley’s credentials are as strong as any winemaker, anywhere.

If you were wondering how Foley came to this project, a short guess has to be centered around the fact that the grapes from Dos Lagos are in his own wineries’ Claret.  If you feel strongly enough about a vineyard to include them in a wine whcih carries your own name you’re probably going to feel comfortable making an esate wine for the fruit as welll.  Foley hasn’t taken on a new project, by our count at least, for at least a decade.  For an industry veteran, I think that speaks volumes about what he thinks of the Dos Lagos fruit.

Lastly, no article about a winery is complete without talking about the folks behind the idea and the brand.  Dos Lagos is owned by Tom & Marcie Dinkel.  The Dinkel’s, unlike so many winery owners (or even wine club owners, present company included) have chosen to not clutter their own website with personal information-so suffice to say that the couple seems to have a diverse set of interests, such as a day job in solar power, loving the America’s Cup which has finally come to San Francisco and of course some art along the way as well.

If you’re looking for a new, interesting Napa Valley Cabernet then Dos Lagos should be at the top of your list.  With their first vintage under a decade ago, Dos Lagos is still a new venture and stands to continue gaining market share and attention as time goes on.

This site uses Akismet to reduce spam. Learn how your comment data is processed.

First a coupon. Then some knowledge.

Before you go, I’d like your email address.  I won’t send a lot of emails, I know you’re busy.  I am too.  But, I will send some of my best content, and I’ll start off by sending you a coupon, in case you’re interested in buying a wine club or gift basket (that one looks awesome up there, doesn’t it?)